One of my sports nutrition cases (a HUGE supplement-fanatic) eats fewer calories than a five year old per day. He is in fitness-model shape and has one day per week where he gorges like Violet Beauregard from Willie Wonka. Only he doesn’t blow up… and chews more than just gum.

I’ve chosen to focus upon the “three offending ingredients,” salt, sugar and saturated fat, because I wanted to present the most horrifying story possible to my client – such excesses seemed like it might do the trick.

The following is his list of foods consumed on, as he indicates, a “pretty standard cheat day:” 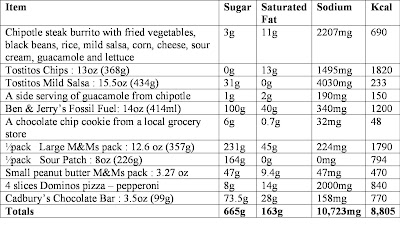 In calculating his total calories, we discovered that he was consuming close to 9,000 calories on his “cheat days.” Although he certainly makes up for calories lost throughout the week on his <1500 kcal plan, it’s certainly one of the more self-sabotaging methods of weight control.

According to the U.S. Department of Agriculture (USDA) and Center for Science in the Public Interest (CSPI), Americans should not consume over 10 teaspoons (40 grams) of added sugars per day, based on a 2000 calorie diet. Food labels generally do not distinguish between added and natural sugars in products. For example, one cup of skim milk has 12g of the natural sugar (lactose). One packet of peanut butter M&Ms is over the daily value at 47 grams of sugar, coming from sucrose. To put this into perspective, 665g is at least 2,660 calories from added sugars.

At 10,723mg of sodium per day, our subject is having close to four times the recommended daily allowance (RDA) for sodium. Focusing on long-term health consequences, such as hypertension, did not seem to affect this individual’s behavior change as did, “reducing tummy bloat in swim trunks.” Likewise, the term ‘chronic heart disease’ didn’t scare him, but not surprisingly, mentioning that 163g of saturated fat would interfere with his ability to maintain his 6-pack abs, did.

Our subject confessed there might be a level of masochism involved (ya think?) Nonetheless, he tends to follow “strict body-building advice,” which includes the cheat day as a method to offset weekly calorie restriction. Google “the vermonster cheat-y,” his favorite website, for more rated-R cheat-day materials. 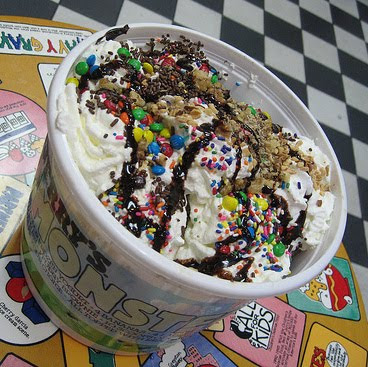 For the record, I am a proponent of eating a planned, portion-controlled ‘off-limit’ snack or meal. By ‘off-limit’ I mean foods that generally don’t fit the bill of health (a donut, a piece of non-home-made cake, a bag of salty chips). Clearly, the goal with this person was to show that "cheat day foods" could and do fit into the weekly budget.

We finally established that ransacking the body for one full day wouldn’t just ruin his chances of beach-body Adonis, but also increase his risk for serious chronic conditions that no beach-body Adonis could ever be worth.

Marissa Beck, MS, RD is a NYC-based dietitian and the Director of Wellness at NextJump Inc.
Posted by Marissa Beck at 9:37 PM