Can I Use Raisins for Carbohydrate Supplementation?

Endurance athletes use a variety of methods when it comes to increasing time to fatigue and promoting recovery.  Meaning, they are looking to find ways to go faster, longer and recover quicker.   If you are an endurance athlete (i.e.: runner, cyclist, etc), chances are you have used a carbohydrate supplement to boost blood glucose levels and promote nutrient delivery during exercise lasting more than one hour.

Primarily during the first hour of moderate to intense exercise, your body draws on glycogen stores for energy (glycogen is the primary carbohydrate storage molecule found in the liver and muscle tissue).  The day before a big event for an endurance athlete, they will build up glycogen stores by eating carbohydrate-rich foods and resting their muscles.  During the race, energy from the glycogen stores will be used first and once it is gone, the body will switch to blood glucose for quick energy.   In order to keep a steady supply of blood glucose, the athlete will consume a fast-metabolizing source of carbohydrate at intervals throughout the race to keep muscles working at their peak performance.

A study conducted at Louisiana State University found that raisins are an effective source of fuel for endurance athletes (2).  Male cyclists (n=10) were asked to complete a 2 hour glycogen depletion period followed by a 10K time trail.  During the time trial, cyclist were given 1 of 2 carbohydrate supplements (sports jelly beans or sun-dried raisins).  The study found no significant difference between finish times, rate of perceived exertion, or power output for raisins compared to sports jelly beans.   The results are shown in the table below (2). 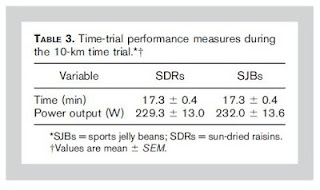 Another study conducted at the University of California-Davis just this past year tested the effect of sun-dried raisins vs. sports chews in running performance (3).  Eleven male runners completed an 80-minute glycogen depletion time (running at 70% of their VO2 max) followed by a 5K timed trial.  The participants completed the trail in three conditions (trials with water, raisins, and sport chews) separated by seven days.    The researchers found no significant difference between sun-dried raisins and sports chews for the time to complete the 5K.

Raisins are also a more cost effective way to achieve essentially the same athletic performance.  The graph below illustrates the cost between raisins and commercial products per ounce.

*Retail pricing from: http://www.gnc.com/home/index.jsp for supplements and http://www.kroger.com/Pages/default.aspx for raisins

Don’t believe it?  Try it out.  Instead of loading your fuel belt with expensive gels and bars, put in a few bags of raisins for your next long-distance run and enjoy a 90-100 calorie handful every 20 minutes.  See for yourself just how much energy you’ll have and how much money you will save! 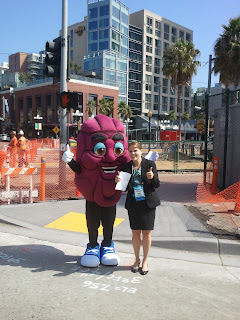 Jill Barnes, MS, Registration Eligible is a recent graduate of Eastern Illinois University and a Nutrition Education Specialist.  Follow her blog at: http://stealthyandhealthy.wordpress.com/  or email her at jill.barnes613@gmail.com.  For more information on raisins, visit: www.loveyourraisins.com
Posted by Gina V RD at 6:48 PM